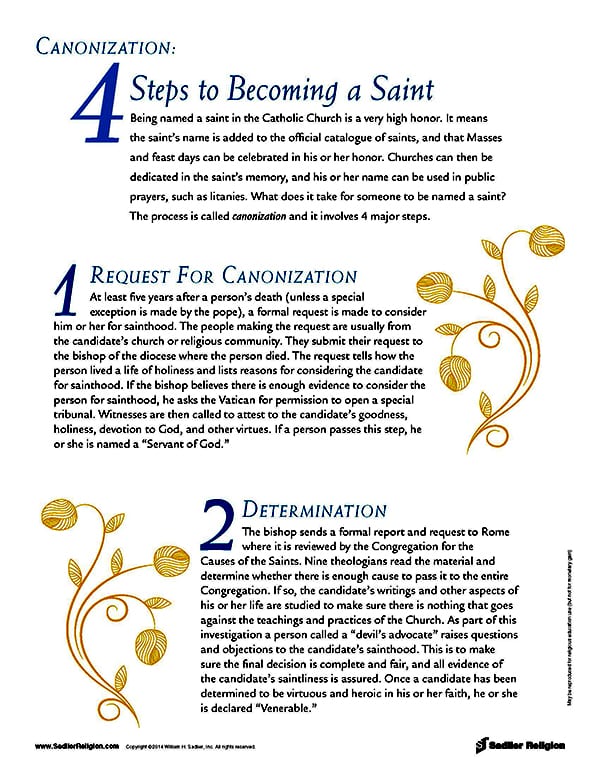 There were three miracles that were needed for De La Salle’s beatification. There was a Brother Adelminian who had been cured of a disease through De La Salle’s intercession, and two other people (Victoria Ferry and Stephen Suzanne) who had also been cured. The Venerable John Baptist de La Salle was beatified in a ceremony at St. Peter’s basilica in Rome on February 19, 1988. Two hundred Brothers were in attendance. He could now be called Blessed John Baptist de La Salle.

The two other miracles needed to raise his name up to the rank of the Saints occurred in 1889, the following year. The quotations below are from a description that was written in an early historical work by Georges Rigault, SJ.

“The first involved a pupil in the residence school in Rodez, Leopold Tayac. Born in Labruguiere, in the Tarn, in 1873, this young man was stricken, at the age of fifteen and a half, with infectious pneumonia, compli­cated by cerebral disorders. He received the last Sacraments on February 10, 1889. On the same day his teachers and school comrades began a novena. On the 13th the doctors announced that death was not far off. Prayers were redoubled. While the Community was assembled before the Blessed Sacrament the youth suddenly emerged from delirium and his body temper­ature became normal. On the 14th a Mass of thanksgiving celebrated the extraordinary recovery. . . . The other beneficiary of a manifest intercession was a French-Canadian. His name was Brother Nethelme. Until 1887 he enjoy excellent health. While teaching a class of young boys in Ottawa, suffered a paralysis of the lower members. Incurable, the spinal cord heavily damaged, he was brought to the Brothers’ headquarters in Montreal, to the infirmary of this major institution of the District. His legs were completely without feeling.  On April 25, 1889 the Communities that composed “Maisonneuve” -Junior, Scholastics, Novices and Senior Brothers – began to prepare for the approaching feast of Blessed John Baptist de La Salle, the first since the solemnities in Rome. A novena was begun; its primary object was the cure of the paralyzed Brother.  During the night of May 3 and 4 Brother Nethelme endured agonizing pain. Nevertheless, he appeared in the chapel for Mass. At Communion time, he uttered the simple prayer: “Holy Founder, if you can do something, now is the time!” On his crutches and in great pain he made his way to the Communion rail. He had only just received the Body of Christ when he felt a shudder in his legs and an urge to walk. He left his crutches at the railing and with firms steps returned to his pew. Those who were present, amazed, saw him-once the service was over – kneel before the relics of the Blessed that had been on display in the chancel and then, in the company of his confreres, climb the long staircase that lead to the Community room.”

There is a longer section in the history of the Institute that gives all of the details about the process of beatification and canonization for John Baptist de La Salle. HERE is the link.