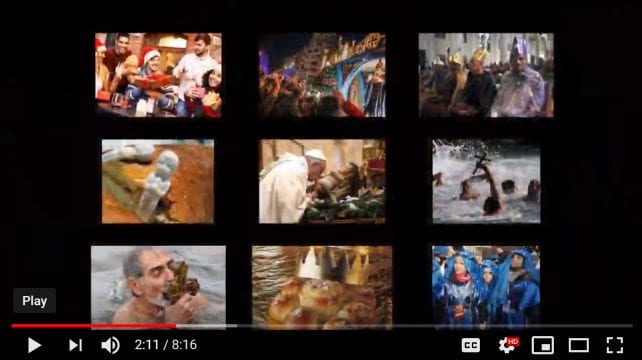 Here is a video about the Epiphany.

There is also a PDF prayer and reflection that can be used with groups.

The text of the video is below.

The short 12 verses in Matthew’s Gospel that describe the story of the three kings – and by the way, nowhere does it say that there were three of them – those few verses have evoked paintings, poems, and popular practices that continue to stir our imagination today. We are captivated by this story about people on a long, mostly nighttime journey to find something important, and – although surprised – find what they truly seek. We call this feast “Epiphany,” a word that means a revelation or a manifestation. It celebrates God’s revelation in Jesus Christ. And we join the Magi on this day in recognizing and adoring Jesus, God’s only son, born of Mary, and becoming one of us. It is the 12th day of Christmas, and we are invited to give our gifts to the Christ child, as the Christmas season comes to completion. Up until the 19th century, Epiphany was celebrated more than Christmas Day. There are still many, many traditions around the world that highlight this Feast day, such as exchanging presents, diving for a cross in icy waters, special church services, faith-filled gestures, parades, and unique breads or cakes with a figure of Jesus hidden inside.

Of course, there are two dimensions to the original story. One is simply the question of whether the Star of Bethlehem was actually real; if there is evidence behind the story. In 2014, an interdisciplinary international conference was held at the University of Groningen in the Netherlands, attended by world-leading specialists in all the relevant fields. Even the Vatican’s Observatory Director was there. The 700-page book that they produced was the first-ever serious academic study of the question. Not surprisingly, there was no single, clear consensus. But the experts agreed that Jesus’ actual birth was between 7 and 5 BC, (There’s a longer explanation why the date is not zero, BC.) and there was a very rare triple conjunction in 7 BC, when Jupiter (a star related to Israel) and Saturn (the royal star) came together three times within a few months. Astrologers of the time used horoscopes as their primary tool and instrument. A natal horoscope could even show the time and place for the birth of a child. The natal horoscope on April 17th in the following year, 6 BC, had the Sun, Jupiter, and Saturn in a perfect triangle, along with other rare horoscopic characteristics, and according to one paper from the conference “It seems to be beyond coincidence that the star in Matthew tells the ancient astrologers exactly what a natal horoscope would have told ancient astrologers. Thus [Michael] Molnar concludes that the star was actually the report of a natal horoscope.”So the star is a definite “maybe.”

Then there is the other dimension of the story. C.S. Lewis wrote that the value of a story “is that it takes all the things we know and restores to them the rich significance which has been hidden by ‘the veil of familiarity.’” Another thing he wrote was “If you have a religion it must be cosmic.” The rich imagery of the story of the Magi invites us to enter into the story, and by so doing, in Lewis’ words, “…we do not retreat from reality: we rediscover it.”More than the star itself, it was its context and its derived meaning that told the real story.

St. John Baptist de La Salle, in his meditation for this feast, compliments what he calls the “holy audacity” of the Magi in following that star. “They feared nothing because the faith which inspired them… caused them to forget and even scorn all human considerations…” (Med 96.2) This was exactly the kind of faith that De La Salle followed himself and promoted for all his teachers, the kind of faith that the Magi showed in not being surprised or disappointed when they found the child in a stable, lying in a feeding trough, covered in rags, with only his parents, poor shepherds, animals, and the stars above as company. This same faith, DLS says, should inspire teachers: “Recognize Jesus beneath the poor rags of the children whom you have to instruct. Adore him in them.”(Med 96.3)

All those engaged in Lasallian ministries are reminded of that kind of faith every time we see the “Signum Fidei” logo (the Star of Faith) which was adopted by the Brothers in 1751 as the official seal of the Institute. The words of our Founder about the importance of the Spirit of Faith brings our Christmas Season to a fitting close: “The spirit of this community is, first, a spirit of faith, which should induce those who compose it not to look upon anything but with the eyes of faith, not to do anything but in view of God, and to attribute all to God.”

May our journey, like that of the Magi, be as faith-filled and blessed in the end.