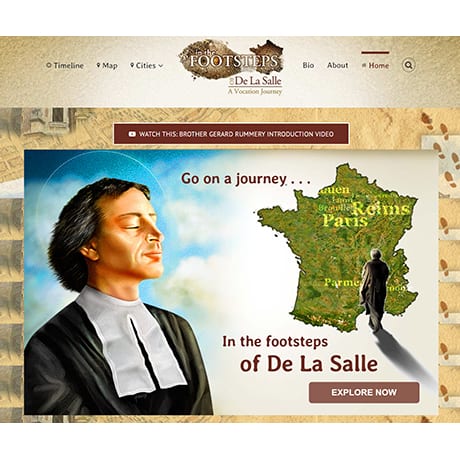 The redesigned In the Footsteps of De La Salle website is now available, in time to mark the memorial of Saint John Baptist de La Salle on April 7. Originally launched in 2012, the Footsteps website takes visitors on a virtual pilgrimage of the major Lasallian historical sites in France. Videos by renown Lasallian scholar Brother Gerard Rummery, FSC, pictures and text offering insight into De La Salle’s life and the founding of the Lasallian mission.

This new version of the website features a responsive design to accommodate various devices, a timeline with overviews and links to explore more deeply, upgraded HD videos, and a Q&A section with Brother Gerard. The new design also brings together elements that were previously featured on separate pages.

There is also an interactive PDF Guidebook that provides a short biography followed by detailed explorations of each location in France associated with  De La Salle. The guidebook has live links to all the videos and web pages, along with discussion / reflection questions for individuals or groups, as they go on their own virtual pilgrimage.