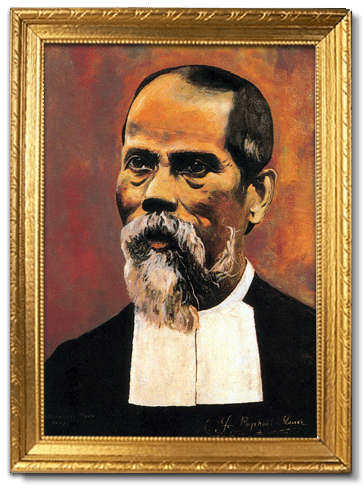 1) There is a very fine video that was done by Mr. Ed Sirois for his school community.

2) There is a larger PDF biography of his available online, and a nice handout for grammar school students.

3) Further online information and links may be found at Wikipedia.

7) The Motherhouse in Rome has provided  a PDF with the liturgical (Mass) readings and prayers for this Lasallian feast, and a webpage that includes his short biography and links to videos of his beatification ceremony in Madagascar.

Brother Raphael was an authentic champion of the Catholic Faith in Madagascar. He belonged to what might have been called the middle-class of the time in Madagascar, in service to the royal family.

He was born in 1856 and certainly had attractive prospects ahead of him. But God’s plans and the young man’s choices pointed in a different direction. He was the first student of the Brothers in that country. He was endowed with a brilliant intelligence and a strong will, both of which helped him challenge his family’s ambitions for him and become a disciple of those dedicated missionaries admittedly somewhat unusual who had arrived in the Island a little earlier.Brother

Raphael-Louis matured quickly and grew culturally, religiously and humanly. He was to show his character as a teacher, a translator of Malagasy works into French works, and a writer of textbooks in this work he was tireless. But a time came when, following riots and agitation for independence that rocked the Island, all foreign missionaries were expelled and Brother found himself elected vox populi as leader of the Island’s Catholics. This was an unexpected role, and it turned out to be incontrovertible proof of his uncommon abilities: forming catechists, organizing meetings, gatherings and paraliturgies in all parts of the Island, composing pamphlets and compendia of Catholic doctrine, as well as writing hymns and poems.

His influence was evidenced by the fact that when after three years’ absence foreign missionaries were allowed to return, they found with amazement that the Catholic communities were quite numerous and that the people had as much fervor as when they had left them. In recognition of his literary output, when the Academy of Madagascar was created in 1902 Brother Raphael was immediately named as a member, and his portrait is part of the gallery of eminent
citizens of the great Island. He died at Fianarantsoa on the coast on May 19th 1919. His remains were translated to Antananarivo in 1933.  He was beatified on June 7th, 2009 and the ceremony was attended by an enormous number of people.