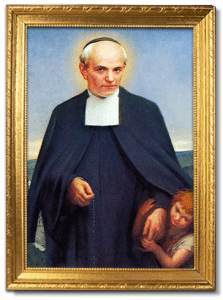 1) There is a very fine video that was done by Mr. Ed Sirois for his school community.

2) A small booklet – currently out of print – is available as a PDF.

3) Further online information and links may be found at Wikipedia, WikiVisually, the website in Rome, and other places.

4) Various kinds of artwork are collected on this Google Photos album and at this link on the LRC website..

6) The Motherhouse in Rome has provided  a PDF with the liturgical (Mass) readings and prayers for this Lasallian feast, and a webpage that includes his short biography, a few links, and a video.

5) There are devotional medals and the like available online.

Louis Wiaux, the third of six children, was born in a small village in French-speaking Belgium where almost everyone was a devout practicing Catholic. His father was a blacksmith, while his mother helped to run a small cafe in part of the family home, where no rough language was allowed and where the evening of Belgian beer and card playing always concluded with the recitation of the rosary.

Louis proved neither physically nor emotionally suited to his father’s trade; he was convinced that the Lord was calling him to a different kind of forge. No sooner had he met the Brothers in a nearby school than he determined to enter the novitiate at Namur. After two years, teaching elementary classes, Brother Mutien was assigned to the boarding school at Malonne where he would spend the next fifty-eight years. He had difficulties at first coping with the demands of both teaching and prefecting. He was rescued by the Brother in charge of the courses in music and art, at the time an important feature of the curriculum. From then on Brother Mutien was not only an effective teacher of those subjects, a vigilant prefect in the school yard, and a catechist in the nearby parish, but a tremendous influence on the students by his patience and evident piety.

He was known to spend whatever time he could before the tabernacle or at the grotto of Our Lady. Among the Brothers, it was said that he had never been seen violating even the smallest points in their Rule. After his death at Malonne, his fame began to spread through Belgium, where many miracles were attributed to him. His relics may be venerated in Malonne at the shrine built in his honor after his canonization.